ADVISORY: Limit Dosage of Polyphenols Such As Curcumin (Turmeric) When Combined With Resveratrol

Some avid supplement users are getting into trouble by mega-dosing on polyphenols, hence the publication of this advisory for educational purposes.

The bulk of the scientific literature regarding polyphenols points to modest doses providing optimal health benefits. This is evidence of hormesis, that a small amount of a “toxin” can activate the body’s defenses rather than the polyphenols themselves producing an effect.

Small amounts of polyphenols are antioxidant while mega-doses promote oxidation (pro-oxidant). Oxidation is the formation of species of oxygen that lack an electron and can be destructive until an electron can be donated to negate any potential tissue damage.

Fortunately, polyphenols spare any adverse effects upon healthy tissues as they target unhealthy cells, pathogenic bacteria or viruses, but not healthy cells. But still excessive doses can induce problems.

The increased consumption of polyphenols from chocolate, alcohol (wine), and other sources during the Christmas holiday parties has been linked the sudden irregularities in heartbeat.

Polyphenols are the most prominent class of natural molecules that promise to ward off many of the maladies associated with aging. Polyphenols are derived from plants and serve as anti-fungal agents. Polyphenols activate more genes than drugs and have broad activity throughout the body, particularly as prebiotics in the digestive tract.

There are more than 8000 types of polyphenols found in plants. Since they have multiple phenol units they are called poly (many) phenols. They bind to albumin that transport them throughout the human body.

The health effects of polyphenols depend on the amount consumed and on their bioavailability.

Polyphenols are strong TNF inhibitors and can be used to quell inflammation.

TNF is an essential part of the human immune system. Over-inhibition of TNF may impair normal immune functions.

For pharmaceutical TNF INHIBITORS, two warnings have been issued: 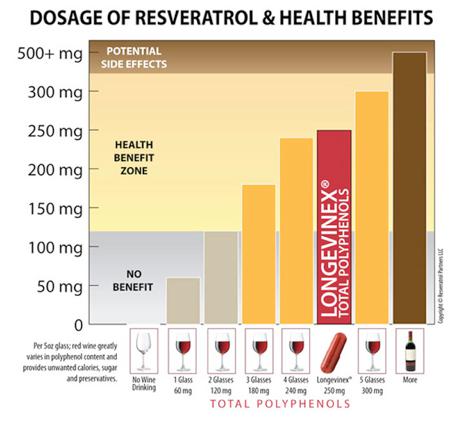 In my experience with resveratrol since it was first introduced as a nutraceutical in 2004 is that it is a very safe molecule. It does thin the blood but has very rarely been implicated in any bleeding episodes or over-thinning of the blood, which is desirable as one ages anyway.

I rarely had to answer questions about Longevinex® side effects until another polyphenol, curcumin (from turmeric spice) was widely marketed on the radio and many consumers began taking Longevinex® + curcumin. It is in these customers that I began to hear of side effects, the anxiety, fast heart rate, flu-like symptoms and skin rash as well as Achilles’ heel tendonitis.

Curcumin is a very potent TNF inhibitor. Most brands of curcumin are provided in excessive doses – – 500 to 1000 milligrams. The companies that market these products, working on a mistaken “more is better” idea, are oblivious to potential side effects, and over-dose consumers, especially when combined with other polyphenol supplements and/or wine drinking.

Anecdotally, a couple of cases of lymphoma vanished after I advised Longevinex® users to cease taking accompanying curcumin.

Like wine, don’t over-do polyphenol supplements. The dosing of polyphenols in Longevinex® has been carefully formulated to avoid overdosage. By combining polyphenols (resveratrol, quercetin, fisetin), molecular synergism results and lower doses actually produce a more demonstrative effect. Furthermore, unlike any other polyphenol product, even when overdosed, the human equivalent of 2800 milligrams of Longevinex® did not induce expected toxicity because of counter-balancing nutrients in the formula.